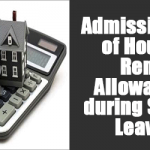 Calculator for 7th CPC House Rent Allowance from 1st July 2017 The Central Government Approved the Revised Allowances with effect from 1.7.2017. 7th CPC recommendation on House Rent allowance is accepted with slight modification. The existing rates in Sixth CPC are 30%, 20% and 10% for X, Y and Z Cities respectively. The Central Staffs expected that these existing rates will … END_OF_DOCUMENT_TOKEN_TO_BE_REPLACED

7th CPC HRA is a big upset for Central Government Employees It is really a Shocking News for Central government Employees that 7th CPC HRA is not increased and retained the recommendation of 7th CPC on House rent Allowances with slight modifications. The date of effect of Allowances is another shock for CG Staffs. The 7th CPC has recommended 24% , 16% and 8% for X, Y and Z … END_OF_DOCUMENT_TOKEN_TO_BE_REPLACED

7th CPC HRA: Justification for Retaining the Existing Rates of 10%, 20% and 30% HOUSE RENT ALLOWANCE Housing accommodation is provided to a small segment of the Civil Servants. While the percentage of satisfaction is very high at the senior level Officers, Employees at the lower levels are to depend upon the market for a dwelling place. Of late recruitment at Gr B and C … END_OF_DOCUMENT_TOKEN_TO_BE_REPLACED

Allowance Committee may submit its report on 20/2/2017 Federation Leaders associated with National Council JCM are keep telling that Allowance Committee might submit its report on 20th February 2017. The CG Staff are already very much upset over the Government’s deliberate attempt to delay the payment of Allowances by constituting many committees. Because the payment of … END_OF_DOCUMENT_TOKEN_TO_BE_REPLACED